It was January 2nd, 9 o’clock in the evening at Madrid Barajas International Airport. I just landed in Madrid, Spain after a 14-hour flight from Vietnam, concluding my week-long winter break and preparing myself for a two-week shadowing program with the Atlantis Project.

When I applied for the Atlantis Project I was a third year international student majoring in Biochemistry and minoring in Health Science, on a Pre-Med track. I had just finished my research Co-Op at Harvard T.H. Chan School of Public Health. My interest in public and global healthcare was influenced by desire to have a direct, first-hand experience and to apply what I have learned from classes into the real world.

Joining Atlantis was a decision I made to explore the complexity of cultures and practices in healthcare in countries other than the United States and Vietnam, my home country. Nevertheless, I did not know what exactly to expect during the program. Contrary to my initial expectations, the Atlantis Project has given me a fulfilling and enriching experience that helped me foster further knowledge of global healthcare and assert my determination to pursue medical training.

There were various countries we could choose, and for each location, Atlantis would assign a regional and a site manager to provide fellows with living and safety information. From my perspective, Spain was an ideal location geographically, logistically and experientially. Spain’s healthcare system is ranked seventh best in the world and provides universal coverage for its citizens. The notion of language barrier or culture shock did not leave me hesitant, thanks to my experiences living and studying abroad for a long time.

A typical day of shadowing started with waking up around 5:30 in the morning. Hospital Universitario Infanta Elena, where fellows shadowed, was not in Madrid, but in Valdemoro. It took me around one hour to get there by Metro, Commuter Rail, and Bus. Although the location was not ideal, Infanta Elena was a better choice for students because it was a teaching hospital and had a supporting and friendly community of teaching physicians in various medical specialties, which most hospitals in central Madrid could not offer due to their busy nature. Physicians typically worked from 8 to 2, then had lunch break and continue to work until 7. For the fellows, their schedule depended on whom they were assigned to shadow. For those that shadowed a surgeon, the schedule would be different. 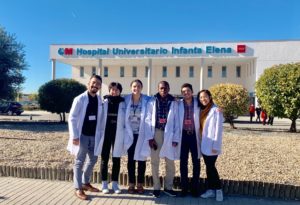 I was assigned to shadow physicians in the Department of Otorhinolaryngology, Orthopedics and Traumatology, and Maxillofacial Surgery. It was interesting to find out there existed nuances in each medical specialty, concerning either specific ailments, or doctor-patient interactions. While shadowing Dr. Diego, an otolaryngologist, I could see a pattern of patients that usually came for his consultation. Many were middle-aged male workers with hearing loss due to their work. Others were elderly patients diagnosed with presbycusis (age-related hearing loss). Treatment included hearing devices that cost ~ €4,000, quite expensive and not covered by insurance, but patients could easily apply for financial support from the Madrid community, providing their income and hearing loss level. Dr. Diego also mentioned the high quality of life in Spain, where it was normal to see elderly over 70-80 years old, while it was rarely the case in central America, where he came from.

I got to see another side of medicine as I shadowed Dr. Galvez, an orthopedic surgeon. One of Dr. Galvez’s surgeries involved De Quervain’s tenosynovitis, resulting from patient’s excessive use of wrist because of his/her job in the cleaning services. At Infanta Elena, doctors tried to avoid opioid prescription as much as possible, and opted for NSAIDS instead. I found this particularly interesting given my understanding of the opioid epidemic in the US.

The Atlantis project has created a platform for those interested in global healthcare to experience it firsthand. However, visiting a country where none of my spoken languages proved useful, I came to acknowledge the difficulties faced by patients of marginalized populations in the US seeking for healthcare, where English was not their first language. 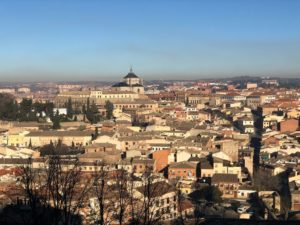 What made Atlantis stand out to me was not just the amount of knowledge I gained, but the support system provided by other fellows, who are now close friends. It’s worth noting how eager each of us was in terms of sharing what we learned every day and how we reflected on ourselves through the conversations we had. I still remembered a conversation I had with Briana and Natalia, two other fellows that shadowed in Gastroenterology and Obstetrics-Gynecology, on the bus after we finished our third day of shadowing. We talked about the prevalent number of female physicians in Spain (about 70%), the collaborative nature and respective relationship between Spanish nurses and doctors, and the emphasis on preventive care and education that Spanish doctors placed on their patients. Not only that, Atlantis created a chance for everyone to learn more about each other’s background and why we decided to pursue medicine.

I found a blessing in connecting to friends who share the same passion for medicine and healthcare through the Atlantis Project. In terms of preparedness, Atlantis has done a great job helping Pre-Health students be prepared for their adjustment to a different healthcare system with a varied scope of practice. The Global Ambassadors for Patient Safety Workshop (GAPS) I had to complete before my departure detailed the ethical guidelines I should follow during this program which followed AAMC guidelines for clinical experiences abroad.

My experience with the Atlantis Project has allowed me to understand myself better as a global citizen and to explore my capabilities. My pursuit of medicine reflected a gradual appreciation of experiential preparation and the Atlantis Project brought me closer to that goal.