Many things at college, and in life in general, make us compare our paths, including our successes and failures, to the people around us. Co-op at Northeastern is a prime example of this and feeling like everyone somehow has things figured out while you don’t. (Spoiler alert! That’s usually NOT true!) I have definitely fallen victim to these beliefs, that my co-op process is doomed while everyone else is accepting amazing offers, and I have learned and grown through each of my co-op search experiences. As a rising fifth year going on my third and final co-op in the fall, I’m going to share my co-op journey with you with the hope that it somehow eases your nerves and reminds you that it all works out in the end!

When thinking about the average co-op search, it looks like taking a co-op class (this looks a little different for each college/major) in order to learn about the process and to set you up for success in finding your first co-op. While in co-op class, most students are applying to a series of co-ops, interviewing at some of them, and then coming to the point of accepting a job that best fits them. I, however, decided to go outside this typical experience and create my own opportunity for my first co-op in the fall of my third year.

I had been involved with a local non-profit organization called Camp Harbor View since I was partnered with them for a service-learning class my freshman year. After that experience, I worked at their summer camp on Long Island in Boston Harbor and continued to volunteer with them throughout my second year. Because of the amazing experiences and relationships I was developing at CHV, I couldn’t imagine going a summer without working at their camp, so I somehow came to the decision that I would make a co-op with them. This vision would allow me to work at camp from June-August and have a more “normal” co-op experience from September-December.

I luckily had immense support from my co-op advisor as well as the staff at CHV, so actually creating the co-op ended up being pretty simple. We had a few conversations about what my co-op would look like and what role I would play at the organization as well as what Northeastern needed from them in order for me to eventually get credit for the co-op. I am still so glad that I was able to take the initiative to propose a co-op with them and grateful that CHV was willing to give it a try. This position was the perfect first co-op experience to set me up for the rest of my time at Northeastern and following co-op searches.

After my first fall co-op, I planned on skipping a co-op cycle to get more in-class experience before pursuing another job. However, once the pandemic hit and it was unclear what classes would look like in the fall semester, I decided in June to go on co-op again in the fall. I was still working part-time with Camp Harbor View for the summer, so I searched for a four-month co-op for the fall. I applied to a wide variety of positions listed in Northeastern’s co-op system, not being too picky and simply waiting to see which organizations were still looking to hire a co-op.

Once I applied to a variety of positions and talked through possibilities with my co-op advisor, I was invited to some info sessions and interviews with a few jobs. I knew I wanted an experience that was very different from my first co-op, so for my second co-op, I was looking to go out of my comfort zone and was hoping to find a job in direct care. One of the positions that I was invited to interview with was with Walker Therapeutic & Educational Programs in Needham, MA. I had heard about this position and organization initially on a co-op panel when I was a second-year in co-op class. From my initial understanding of the position and the potential to interview, I knew I was interested in co-oping with Walker and I was so excited to get the interview.

After an initial phone screening with Human Resources, I had another phone interview with one of the directors of residential programs at Walker and was invited to a walkthrough of the campus to see where I would be working and to learn final details about the job. Each of these steps led me to eventually getting a job offer to work in Walker’s Intensive Community Based Acute Treatment unit, a job that was incredibly different from any experience I had before, which was exactly what I was hoping for. I didn’t have my co-op offer finalized until July, and although it felt like this was late timing compared to my peers and the “typical” co-op process, my second co-op search and the job that I accepted worked out perfectly for what I was looking for.

Somehow I have reached the point of being a rising fifth year and pursuing a third and final co-op. Despite feeling qualified and experienced going into my final co-op search, for a few weeks at the beginning of my search, I was feeling incredibly defeated about finding a job. Once again, I am continuing my work with Camp Harbor View for the summer, so I was only searching for a four-month co-op once again this summer. I was confused at the beginning of my search because I honestly wasn’t even sure specifically what I wanted to do for my last co-op. I applied to a wide variety of positions that seemed interesting, and I simply waited to see if and where I got any invitations for interviews.

It took a couple weeks, and lots of anticipation and impatience from me, but I was finally invited to interview for various different co-op positions that I was interested in. I was certain that I was looking for a four-month co-op to be able to balance co-op and my job with Camp Harbor View, so I made the decision to ask each organization I interviewed with if they would be able to accommodate this if I were selected for the position. After my first few interviews, I was getting what felt like endless job rejections, potentially related to the fact that I am not looking to work the full six-month co-op cycle. Eventually, I was invited to a Zoom screening, phone interview, and in-person interview with St. Ambrose Family Shelter in Dorchester. After each conversation I had with St. Ambrose, I became more and more excited about the potential to co-op with them, so I was thrilled when they offered me the position, and they are even able to accommodate a four-month opportunity. As my final co-op search, I was hoping the process would be easier or more straightforward than previously, and that was certainly not the case. Despite my frustrations and worries about finding a co-op, once again, it all worked out in the end and I cannot wait to begin this position in the fall.

None of these stories I share are me trying to tell you to self develop a co-op, wait until the last minute to decide to go on co-op, or anything else that I have done on my co-op journey. Instead, I hope it is clear that everyone’s path is different and there is no “right” way to do co-op. If you’re really set on finding a job, there is something out there, and even if it isn’t your dream job, there are always lessons to be learned from any co-op. Next time you find yourself comparing your path to someone else’s, remember that you’re on different paths for a reason. Embrace your journey and do what is best for you! 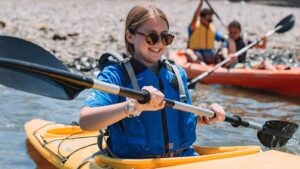 This photo is from my first summer working with Camp Harbor View, where I eventually pursued my first co-op 🙂