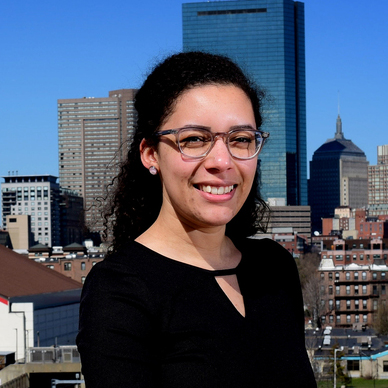 Amina Ly recalled that growing up, her father would share stories of his own childhood in rural Mauritania, in West Africa, and his village’s thriving agriculture-based economy. But when she visited the village for the first time when she was 8 years old, she was shocked to find that the once fertile land had grown desert-like; a process known as desertification.

Thus began her an interest in the environment—one that sprouted from personal experience and has since blossomed at Northeastern through a variety of research and co-op experiences.
“As I got older, I began to realize that the desertification problem was rooted in a larger issue—climate change,” explained Ly, S’18. “In order to tackle this large problem, I have to think bigger than just one village and consider the causes and effects of climate change on a global level.”

In 2017, Ly earned the Udall Scholarship, an award provided by the Udall Foundation to sophomores and juniors for leadership, public service, and commitment to issues related to American Indian nations or to the environment. As part of the scholarship program, Ly and other Udall Scholars attended a five-day conference in Arizona where they engaged in professional development activities and built community with each other. Scholars also receive up to $7,000 for academic expenses as well as resources to connect to an alumni network of Udall Scholars.

Ly has taken an interdisciplinary approach to understanding global environmental challenges—particularly in urban areas—by coupling her major in environmental science with minors in political science and computer science. At Northeastern, she has applied data-analysis skills to these pressing challenges—exploring the effects of growing human populations on the climate and on our limited natural resources. In 2015, for her first co-op, she worked at EnerNOC—a provider of energy intelligence software and services. There, she reviewed energy use data to help predict future energy trends, streamlined procedures that helped eliminate manual reviews by analysts, and led an independent project analyzing energy and production patterns in developing nations.

Back at Northeastern, she’s led two independent research projects. As part of one, she found a statistical relationship between political conditions in North Africa and the increasing desertification of communities that once sustained robust farms—much like her father’s village. The other, which drew upon her prior experience at EnerNOC, focused on taking a data-driven approach to understanding the energy issues faced by countries with developing economies and underdeveloped energy infrastructure.

Ly also began working in Northeastern’s Sustainability and Data Science Lab, led by associate professor Auroop Ganguly. This opportunity, she said, has increased her understanding of climate risks as well as helped her in identifying motivating factors that may further encourage sustainable urban development.

Ly has been involved in multiple research-based service projects at Northeastern. In one such project, which dovetailed with her data analytics experience, she led a team that helped the DREAM Program—a mentoring program pairing college students with at-risk youth—with developing and distributing a survey to help the organization measure and standardize best practices across its multiple program sites.