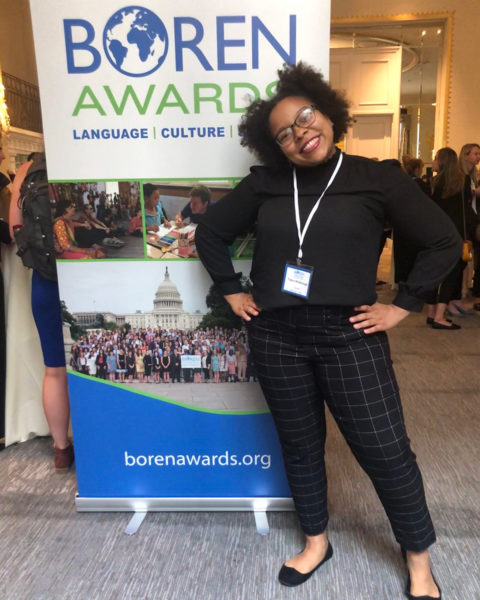 Taylor Kimbrough DMSB’22 entered Northeastern intending to major in Spanish and International Affairs with a minor in Chinese. Taylor had excelled at languages in high school, learning four years’ worth of Mandarin in half that time and earning the National Security Language Initiative for Youth (NSLI-Y) award from US the Department of State to study Chinese in Chengdu, China for six weeks in the summer before her first year at Northeastern.

It was on a Dialogue of Civilizations in the summer after her first year, though, that Taylor realized she wanted to apply her language skills in a different manner. The Dialogue included visits to numerous Chinese businesses and startups, and Taylor saw the possibility of combining a business education with advanced language and cultural study. That is how Taylor became a finance major with minors in international affairs and Chinese—and why she decided to pursue a study abroad experience at the University of Hong Kong.

Taylor earned the Boren Scholarship, a federally funded award that promotes linguistically intensive study abroad in regions and languages crucial to US national security, to support her studies in Hong Kong. Unfortunately, due to political unrest in Hong Kong, Taylor had to undertake her studies in China — and these studies were themselves interrupted due to COVID-19. Taylor will undertake her Boren studies once again, however, when the State Department and health officials deem it appropriate to do so.

The opportunity to study business while deepening her language skills and immersing herself in the culture offers excellent preparation, Taylor says, for both her remaining Northeastern experiences and her long-term career goals. She hopes to pursue a global co-op and eventually to promote US-Chinese business partnerships, perhaps as an Economic Officer in the US Foreign Service or as a consultant in the international finance space.